I started marshalling at Castle Combe in 2012 and my first event was at Camp corner and it didn’t disappoint. I had a thirst for action and I continued with my trackside duties right through 2013 and 2014 attending the BTCC at Thruxton and getting my first taste of proper speed at the exhilarating Church corner - I was hooked.

Since 2012 I’ve attended two international events, the 2015 FIA Formula One Texas Grand Prix and the 2019 FIA Formula E-Prix at Brooklyn, New York. I also attended the 2016 FIA Formula E-Prix at Battersea Park in London. I love the pressure of international events and I love marshalling in the USA. Back in the UK I progressed through the grading system gaining my incident grade in 2015 where I switched my intention to flagging, a duty I continue to carry out today.

I qualified as a MSUK Licensed trainer in 2017 and have delivered two marshals training days for the BMMC. I have been the regions training officer since 2017 and I took up the post of regional chair in 2020.

I absolutely love the motorsport environment and the community it brings. In time, I intend to continue on to Post Chief and then attempt to move into Race Control as a Probationary Clerk of the Course or even dabble as a Scrutineer.

In my spare time I am a serving member of the armed forces, which makes marshalling difficult sometimes! I also enjoy walks with my fiancé and dog Rolo, long weekends in the countryside and general engineering odd-jobs around the house. I am also a drummer in a covers band, albeit very much out of practise!

Charlotte came to marshalling rather late in life, when a friend encouraged her to attend a training at her local circuit, Castle Combe. That was in 2018 and since then she has attended a variety of events: races, track days, action days, and at a number of circuits.

Charlotte is mainly at her local track near Chippenham, or at Pembrey. She has chosen to specialise in start line and has sufficient signatures to upgrade from a trainee next year.  Despite being a trainee, she has been first marshal on scene at several incidents, putting her learning into practice.

She works full time as a Town Clerk in local government in Somerset and so getting track side is a welcome relief to a commute and sitting at a desk for much of the working week.  Those who know her know that she doesn’t know much about cars, but it’s about the people and how all the roles fit together to enjoy a day of racing.

Charlotte volunteered to be the secretary of the BMMC SW regional committee as this is something that she does in the day job.  It’s interesting to see the effort that goes on behind the scenes to bring you events, training, the newsletter, to manage upgrades and to represent your interests in the region and at the national committee.

Please get in touch if you have any suggestions.  The committee list is in the newsletter and we are here to hear from you, to help you and to bring you a service that represents your needs. 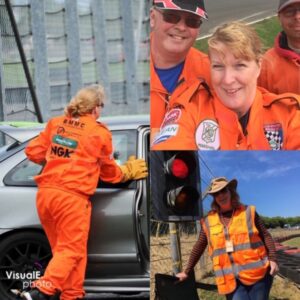 A Brief history of Paul's Marshalling career and what he gets up to outside of motorsport.

I first became interested in motor racing back in the mid seventies, a friend of mine was a mechanic for Dorset Racing in the European series, they ran a Lola T290 with drivers Ian Harrower, Ian Bracey and Tony Birchenhough. Chris later went on to mechanic for ADA Racing in Group 2 racing. Nick Mason of ( Pink Floyd ) fame also drove the car at Le-Man also our own Mick Wilds who drove for Ferrari and is now an instructor who comes to Castle Combe.

In 1980 I wanted to become involved in motorsport, but like many of us could not afford to race so looked at other ways to get involved. Marshaling seemed the best option for this. So I went along to my local circuit at Castle Combe on a training day at the same time joining the BMRMC as it was then. I was made to feel very welcome, the bug hit me and I have been involved with racing and marshalling for 36 years now.

There have been many personal highlights I suppose over the years. Meeting many drivers both at Combe and other venues. One that comes to mind is when Formula 3 were still racing at Combe. The days racing had finished and my son and I were going back to the tavern for the raffle, going through the paddock I pointed out to Ben Nelson Piquet who was there with his son. I stopped to have a chat and Nelson was a real gent he made time to talk to us. So cheekily I told him about the raffle and asked him if he would do the draw for us. You should of seen the look on peoples faces when we walked in. True to his word he got up on a chair and drew the raffle tickets (he was great and enjoyed the whole thing) a real gentleman.

Things took off in 2007 when I did my first Grand Prix at Silverstone. By then I had graded to Examining Post Chief. That was an eye opener for me. That year I also marshalled in Dubai at a GT race event, I also was very fortunate to be picked to go to the first ever Grand Prix in Abu Dhabi in 2009.

I have been a Motorsport U.K trainer for 6 years and I enjoy the role. It’s my belief that marshalling and racing have been good to me and I have made many good friends, so wanted to be able to give something back. That’s also the reason I took the role of national secretary for the BMMC.

Outside of motorsports and marshalling I have done and had many interests. I played cricket and football when younger, I have an interest in martial arts, I trained in karate for 20 years and became a 2nd Dan black belt. I was an instructor at the club and also became a national judge and referee traveling to Holland, Spain and Romania to teach and judge. I was involved with a gymnastic club in my home town, becoming involved with raising money to get a purpose built gym for the club. I had the honour to escort round the Princes Royal when she came to officially open the building.

GRAHAM ELLIS, MEMBERSHIP SECRETARY
Graham has been marshalling for just over two years and has gained his track marshal rating; he will be pursuing his speed marshal rating during the 2020 season. As an engineer Graham has an interest in vehicles and has decided to look at the work of the rescue teams and is hoping to attend at least one training session in 2020 to see if this is for him or whether he just stays on the bank. He is a member of BMMC, BARC and the Silverstone marshal’s teams.

Outside of marshalling, Graham is semi-retired having run his own businesses over the past 22 years. Ellis Transport Services is an international transport consultancy and accident investigation organisation, Graham has investigated several high profile cases covering both fatalities and major fraud for police forces as well as undertaking every type of accident investigation involving land based transport. He has been involved in two major EU research projects working with partners from across Europe over the past 10 years. His second business, transport stationery services, which produced legal documentation for the road transport industry was closed at the end of 2018 as everything was becoming digitised.

Along with his wife Celia, whom Graham has introduced to speed marshalling, Graham owns a house in Spain as well as an active olive grove which they both farm and where they produce their own extra virgin olive oil. This is where they spend a lot of their time when not marshalling.

I’ve been Marshalling just over 4 years. I got involved through having an interest in motorsport all my life, as a family we used to make the annual trip from Cornwall up to Thruxton for the BTCC, and the odd trip to the Goodwood FOS. Once I had the ability to get myself to and from circuits I signed up for a taster day at Castle Combe.

I am usually marshalling at Castle Combe but have visited circuits all over the country. Having followed the BTCC to every circuit in 2019, I am aiming to follow a more varied range of racing next season with the hope of attending the British GP and London round of Formula E. My aim is to continue to gain experience in the various roles within being a marshal from flagging to Post Chifeng and to also, eventually, visit every circuit in the UK!

When I’m not Marshalling I am often either running my local Cub or Scout pack or working.