“The Home of British Motor Racing” is located just south of the A43 on the border of Buckinghamshire and Northamptonshire. The circuit is owned by the British Racing Drivers Club (BRDC) and is managed by Silverstone Circuits Limited.

Silverstone is easily reached off the A43, which links the M40 (from junction 10 or 11) and the M1 (from junction 15A). It is well signposted from the A43. From Dadford Road, you turn into the main entrance, and go past security. There is a 20 miles/hour speed limit on site. For directions, click here.

The signing on location varies, please check your instructions. Typically, sign-on is in the Garage under Race Control in the National Pitlane. However, if events run on both tracks, sign-in for the International Circuit is often in the Wing (International Pit Lane), and some larger events use the UTC College building. At the moment, sign-on is done electronically before the event. 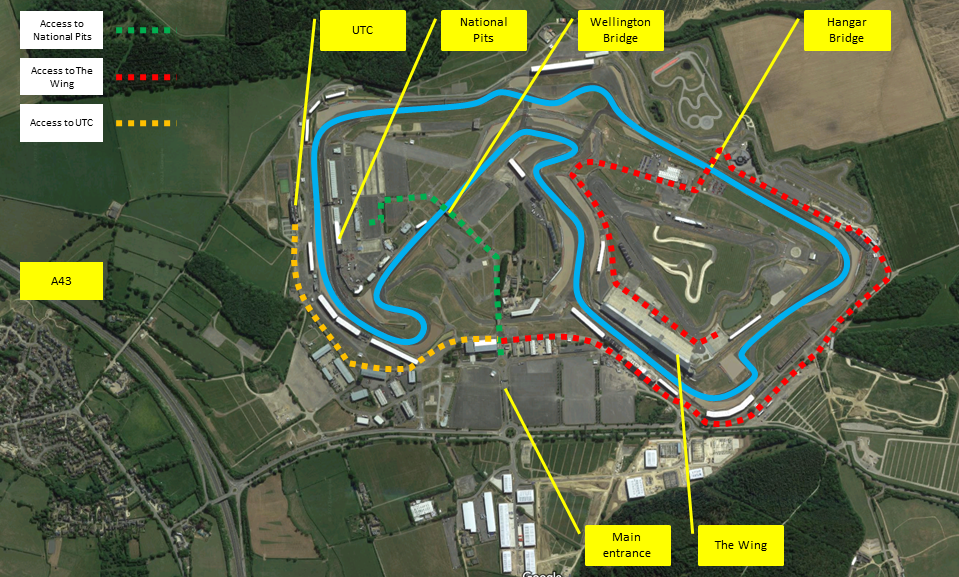 To get to the National Pits, go straight from security across the bridge (over the old track), and follow the signpost to National Pitlane across the second bridge (over Wellington straight). Past the medical centre, you find the paddock car park. From there, you can walk towards the left and the garage to the left of the pit lane.

To get to the Wing, turn right after security and follow the perimeter road until you get past the Porsche centre and turn left across the bridge over Hangar Straight. Turn right past the Aston Martin garages and the Heliport and follow the road to the right. Go to the end of the Wing and park on the left in the ‘FIA Compound’. You can walk into the paddock and the entrance on the left takes you up towards the media centre.

To get to the UTC, turn left after security and follow the perimeter road to the National pit straight. The UTC will be directly in front of you, and you can park at the UTC or behind the grandstand.

Sign-on is typically split with Incident marshals and Incident Officers on the left and all other roles on the right.

Silverstone organises its posts slightly different, with Post Chiefs and Flags sometimes away from the incident team. Flag points are numbered, and Incident posts referred to by name. There are three track configurations:

Silverstone can run both shorter tracks at the same time, please be aware when volunteering you select the correct club / track configuarion. 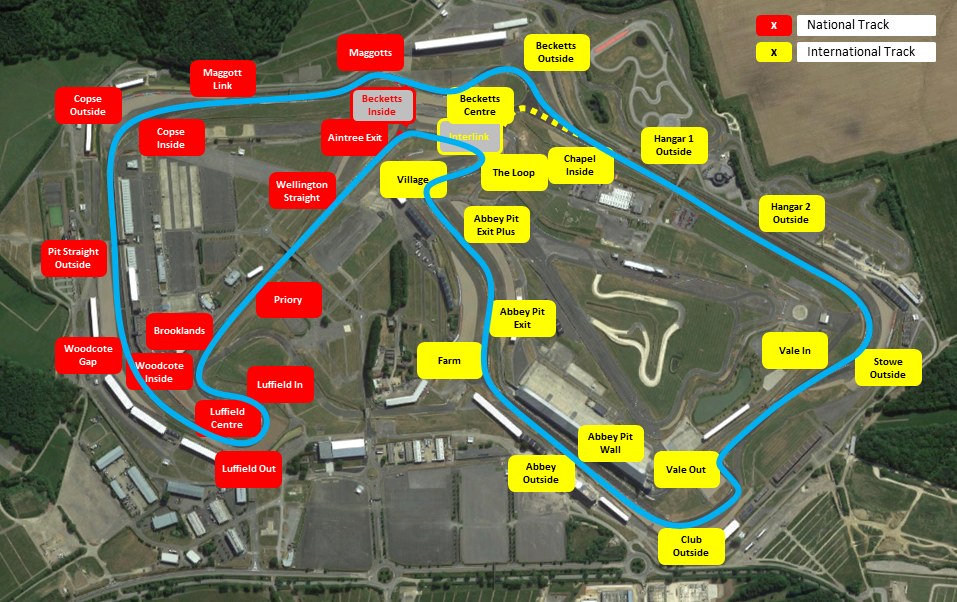