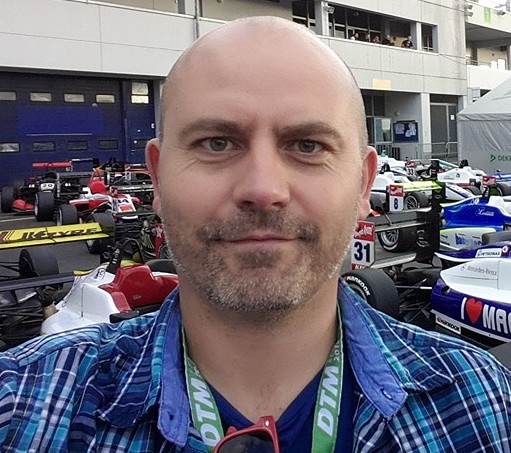 I’ve been a motorsport commentator for over twenty years now – having first been persuaded by an old racing pal to pic up the mic at Little Rissington, back when I was still competing in karts. To my surprise, it went pretty well and I ended becoming the resident commentator for five years or so, before I started getting work at car racing circuits, thanks to the support of Andrew Wilkins and the brilliant David Addison.

Over the years I’ve been lucky enough to commentate at events all over the UK and across Europe, through my TV work with championships like the DTM, European F3 and Formula Renault Eurocup. For the past few years I’ve also been privileged to be part of David Addison’s commentary team for the British Grand Prix at Silverstone. Believe me, I still have to pinch myself.

In 2016, I was also given the opportunity to take over as the BTCC’s lead circuit commentator from the great Ian Titchmarsh. I absolutely love those weekends and working alongside Alan Hyde is – as you can imagine – seriously good fun!

I’ve also worked as a sports TV producer for the past 15 years and formed my own production company – Chris Hartley Media – in 2016. Over the years I’ve produced and edited what I guess must by now be hundreds of motorsport programmes for championships like the Fun Cup, Britcar and TCR UK.It can be really hard work, I spend a lot of time travelling and the lack of free weekends isn’t great for my social life! But not many people are lucky enough to make a living out of their passion and I love doing what I do.

Quite simply, without marshals, the rest of us wouldn’t be able to have all of the fun we have watching and being involved in racing. They give up their own time and considerable expertise to be the eyes and ears of the officials and competitors – keeping everyone safe and events running smoothly. And they do it with a smile on their faces.

Come rain or shine, you can always rely on the marshals to be there. But with more and more race meetings and only a finite number of volunteers, we need to support our existing marshals and get more people involved. I’m therefore delighted to have been asked to support the excellent work of the BMMC.