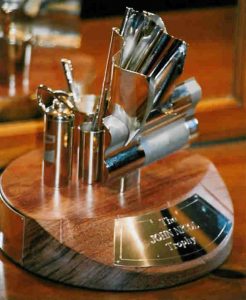 This trophy was raised in memory of the highly regarded
Clerk of the Course and FIA Race Director who sadly
died too early. He was always concerned with the welfare
of all marshals and is still missed by all who had the
pleasure of working with him.

The trophy is awarded to the marshal nominated as the
Best Newcomer by their regional committee and was
first presented in 2008.